Home » About us
Kennel “Z Łowickiego Księstwa” has existed since the end of 2004. Over 25 years live with us a variety of dogs. For some time now we have the conditions for the realization of our dream – a dog kennel. At the beginning, the choice fell on the Bernese Mountain Dogs. Then our attention was drawn Leonbergers.
We think that small is also beautiful, so since 2008 we also have Chinese Crested Dogs. Their beauty is somewhat controversial, and … this is what determined the selection of a toddler for breeding.
Since 2014, to our kennel has joined another race – White Swiss Shepherd. 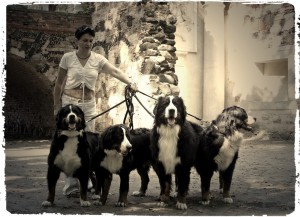 The beginning of true kennel is our founder breeding Bernese Mountain Dog Mł.Ch.Pl.Ch.Pl. Reni “Ze Spalonego Młyna”. True and proud lady. From the first litter we left a great puppy Aura. She grew up on a beautiful, albeit unruly lady. She don’t like exhibitions but won the Polish Championship. Then, we had Baron. And after a few years also joined Jane Fonda “Z Łowickiego Księstwa”.
It looks really great to have all of them at the gates 🙂
We fell in love in Leonbergers through lovely and delightful
Abra “Z Zielonej Wolicy” – Youth Champion. Unfortunately due to injury feet (car accident) and light limp she ended perfectly promising show career.
Since 2008 he has lived with us chinese crested dog – Hortensja “Dwie Tęcze” and some time later joined Gentiana Lavandula.
In year 2014 new breed of kennel launched Szaga “Jagodowe Bory” – our first White Swiss Shepherd. She promises to be a wonderful dog both in terms of behavior as well as the look.
Breeding is our hobby, allowing to break away from the stress and monotony of a work as surgeon and insurance agent. With the dogs we met a lot of cool, positively crazy people. And slight hint of competition at shows helps to forget about everyday problems.
Ta strona korzysta z ciasteczek (cookies). Więcej informacji